Shaykh Shakil was born in Bolton, greater Manchester , U.K. He is the youngest of five siblings. He attended the local primary and high schools until the age of fifteen, when he was enrolled in the Islamic institute of Islamic education in Dewsbury U.K upon his late father’s wishes. He completed his high school and carried on there with his Islamic theology course.

After extensive studying for approximately nine years he received the title scholar of Islamic Science and Arabic literature in recognition of proficiency in the program of study by the institute’s bachelor’s degree equivalent course.

He also received the title of Qari after studying the ten different ways of reciting the Holy Quran.

After graduating he spent a year abroad preaching Islam in remote villages in the Asian subcontinent. Upon his return he went on to become an Shaykh and he started chaplaincy at the hospital.

He migrated to the U.S.A in 2004 to Florida where he was the main imam and Nazarah program director for the Islamic society of Tampa bay area for five years. His duties included leading the 5 times prayer and the jummah khutbah, holding study circles, counseling for Muslim families, interfaith work, and organizing youth activities.

Currently he is the instructor of Nazirah program for Islamic Center of Frisco Texas, where he leads the prayers and teaches the children Quran. He currently performs the jummah khutbah at the Islamic centers of McKinney and Lewisville.

He is actively involved in Dawah work. 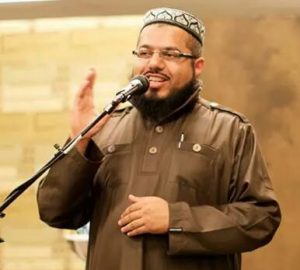